Cardiac patient benefitting from the rewards of rehab

Many heart patients seem to have trouble committing to cardiac rehab programs. Here’s what’s Toronto Rehab is doing to help people get the post-surgery help they need. 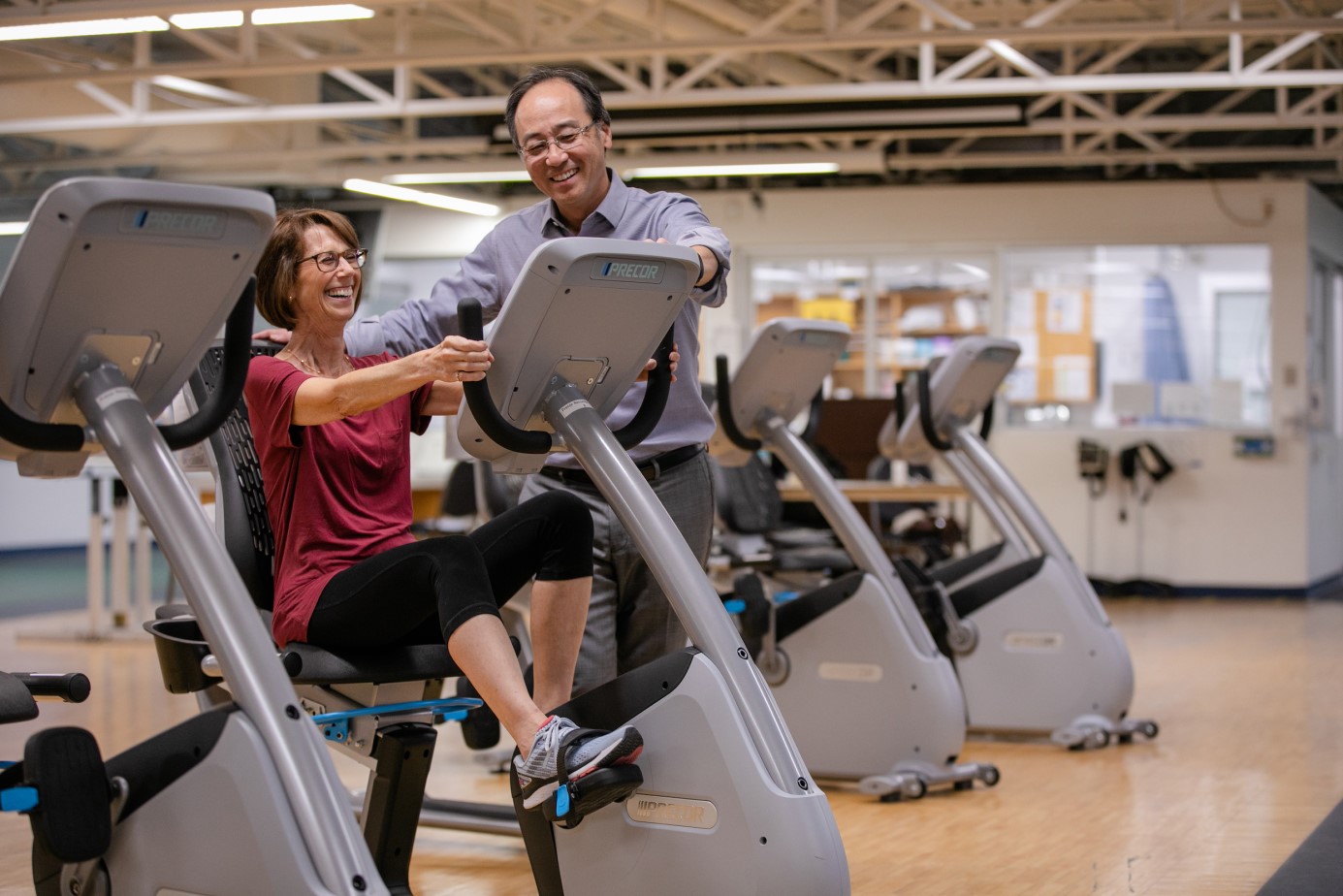 In the summer of 2017, Jo Meingarten was at work when she suddenly felt severe, painful pressure in her chest. Because she was healthy and had no risk factors for cardiovascular illness, she didn’t immediately seek help – it took the urging of a friend to get her to visit a local emergency room. It was a good thing she did: Meingarten was diagnosed with a heart attack and admitted to hospital.

She was ultimately diagnosed with takotsubo cardiomyopathy, a condition where acute emotional stress puts severe strain on the heart and weakens its ability to pump blood.

Fortunately, over the course of several months the condition reversed itself – it doesn’t always – but the scare was a sign that Meingarten, who lives in Toronto, needed to change her lifestyle. Her doctor urged her to consider participating in a six-month cardiac rehab program at the Toronto Rehabilitation Institute’s Rumsey Centre, where healthcare providers help patients change their lifestyle to reduce the risk of another cardiac event.

Meingarten wasn’t looking forward to it. “I’m the type of person who would always choose reading a book over doing just about anything else,” she says. She’s always associated exercise with, well, suffering. But Meingarten knew that her lack of exercise was catching up with her.

At the first session, which occurred about six months after her visit to the emergency room, a rehab doctor conducted a stress test, where she walked on a treadmill while her blood pressure, heart rate and her heart’s electrical rhythms were measured. The medical staff wanted to determine how much she could exercise before her heart started pumping abnormally. From there, her team created a personalized exercise program – “you get a ‘prescription’ based on their knowledge of what would benefit you the most, as well as what you’d be most likely to maintain in the long run,” explains Meingarten.

After a couple of walking sessions – she had one every week – her Toronto Rehab exercise specialist, Lauren Jenkinson, who was monitoring her heart rate, gently prodded her to pick up the pace a little.

To Meingarten’s surprise, the power walking wasn’t as difficult as she had feared, and, surrounded by people who had gone through similar health scares and wanted to transform their own health, she started to feel that it was something she could incorporate into her life. Over the next six months, she learned more about nutrition, how stress affects the body, and the importance of aerobic and resistance exercise.

“I learned that exercise doesn’t have to be oppressive to improve the working of your heart,” she says.

Too many patients don’t join rehab or stick with it As Meingarten found out, rehab works. Studies show that cardiac patients who complete rehab are 25 per cent less likely to die in the five years after their cardiac event, according to the Centers for Disease Control and Prevention, compared to those who don’t go to rehab. There are numerous other benefits as well.

To Meingarten’s surprise, the power walking wasn’t as difficult as she had feared, and, surrounded by people who had gone through similar health scares and wanted to transform their own health, it was something she could incorporate into her life.

“It reduces the chance that you’ll land back in the hospital, and it improves your quality of life,” explains Dr. Paul Oh, Medical Director of the Cardiovascular Prevention and Rehabilitation Program at the University Health Network.

However, despite the known benefits, many cardiac patients aren’t getting the rewards of rehab. Across the province, only about 30 per cent of all eligible patients get referred and enrolled into a rehab program, and only a fraction complete the entire course. The COVID-19 pandemic has made it even more difficult for people to go to rehab, with many rehab-related programs in Ontario either closed or operating at a lower capacity.

Generally, the numbers are even worse for women, says Dr. Oh. For myriad reasons, many don’t start programs or they drop out – they’re not referred by their doctors, busy work schedules and caregiving obligations prevent them from attending, mental health issues and transportation barriers make it harder to get to a program. Rehab, though, can be the difference between life and death for some.

For the last several years, researchers at the KITE Research Institute, the research arm of Toronto Rehab, have been focused on trying to engage more patients in the program. They’re taking a multifaceted approach that involves home-based options, women’s-only programs, peer support and more. So far, these interventions are helping, with patient completion rates sitting at about 70 per cent overall for all of Toronto Rehab’s cardiac programs, compared to a 50 per cent average at other sites. But doctors would like everyone to finish their programs. 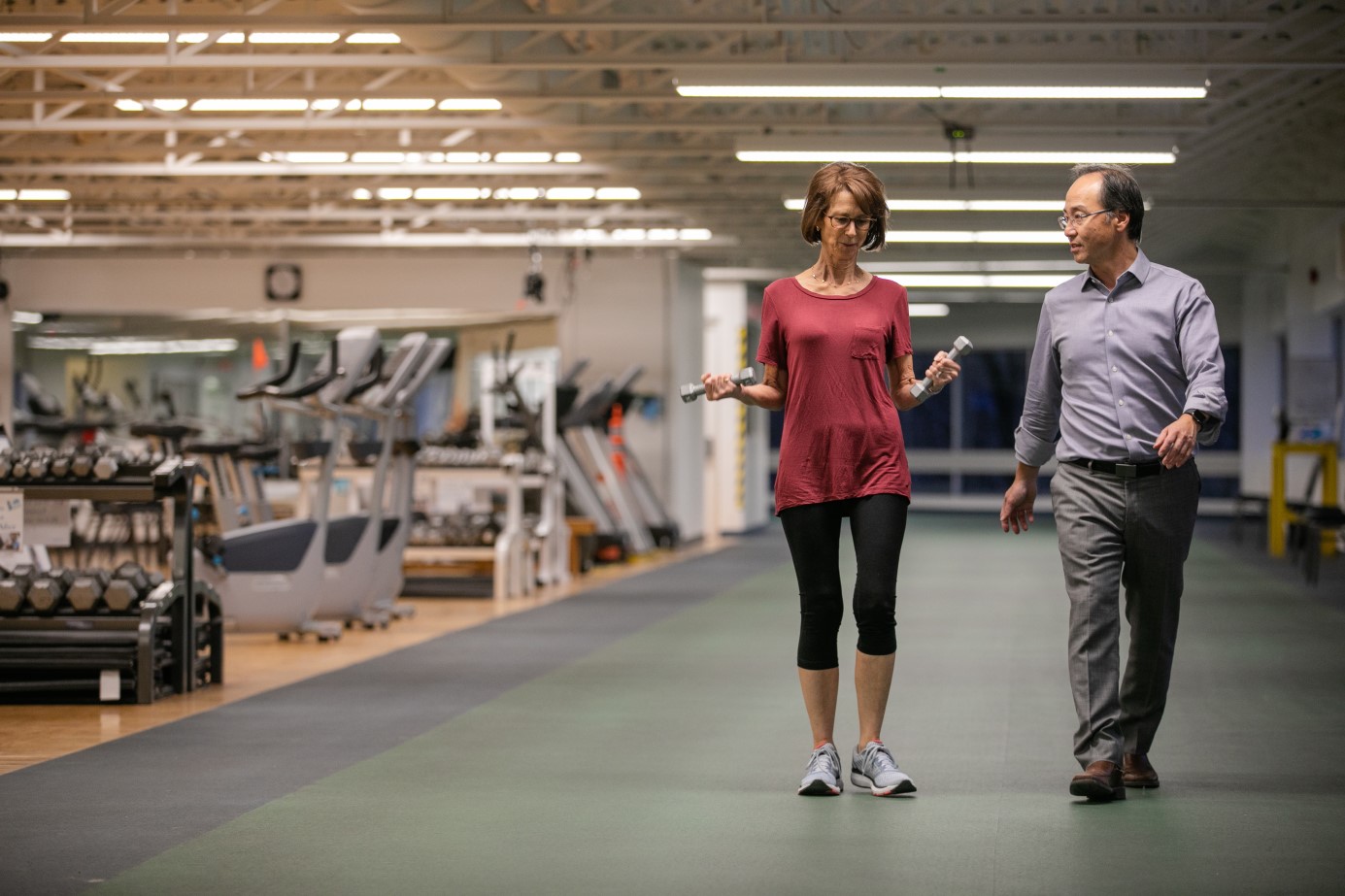 One of the reasons completion rates are higher at Toronto Rehab, explains Dr. Oh, is that it has a supportive staff that includes physiotherapists, kinesiologists, dietitians, social workers, nurses and more.

“We have a highly talented, highly motivational, multidisciplinary team who work with our patient population on a weekly basis to provide that expert coaching, motivation, and to some degree, accountability.” The ultimate goal of the program is to create a way of life that will continue long after people’s six-month program ends, he says. “What we hope over time is that patients get used to the lifestyle, and the external motivator shifts to an internal one.”

Before the pandemic began, Dr. Oh was working on an at-home rehab program to help those who couldn’t get to a hospital for their weekly visits, either because they didn’t have the right transportation, or they couldn’t give up the time to travel into Toronto. The lockdown forced his team to ramp up their efforts.

Dr. Oh and his team quickly moved to create a one-on-one 16-week program that was done over video through Microsoft Teams and via telephone. However, it wasn’t as effective as they had hoped. Rehab is most successful when it’s done in groups, where participants can push each other to get through each exercise. Without that component, people weren’t as motivated to come online. And, because it was one-on-one, they had to reduce the number of people they could help. “We lost that peer support aspect and we lost the economies of scale,” says Dr. Oh. “But it was effective in maintaining rehab experiences for those who use it.”

158,000: The number of patients who are diagnosed with heart disease every year.

He eventually, shifted the program to include four week in-person sessions at Toronto Rehab, done in socially distant groups of six, then 12-week at-home rehab on video with those same people. That allowed more people to take the program – Toronto Rehab can now help the same number of people as it did pre-pandemic – but also experienced positive results. “We’ve seen high engagement with the program, high levels of adherence, positive changes in fitness,” he says. “People say they really appreciate the small group and the personalized attention to program.”

In addition to the virtual support, which also includes access to a variety of educational materials, a kinesiologist or physiotherapist calls each home-based patient once a week. “They’ll talk about what they’ve been learning and the goals for the next week,” explains Prof. Sherry Grace, a senior scientist at KITE.

While Toronto Rehab’s virtual program is still expanding, research shows that home-based rehab programs are just as successful as on-site programs at reducing the risk of another heart event.

We have a highly talented, highly motivational, multidisciplinary team who work with our patient population on a weekly basis to provide that expert coaching, motivation, and to some degree, accountability. – Dr. Paul Oh.

Addressing the high rate of rehab reluctance from women has long been a priority for Toronto Rehab. Researchers at KITE found that women are less likely to complete rehab largely because of caregiving roles and mental health concerns. “We often hear women say, ‘But I have to take my grandkids to school,’ or ‘Who’s going to do such and such?’” notes Grace. “We explain, ‘You’re not going to be able to do these things if you’re not alive and well. That’s why you need to come to rehab.’” And she adds, women who go to rehab benefit even more than men, and women are more likely to have other health conditions that can also be treated with rehab, like arthritis and depression.

Over the last two decades, the program has been running a women’s-only rehab program, though the pandemic has put it temporarily on pause. Many women, they learned, prefer exercising and receiving treatment in this type of environment. It was one of the first healthcare institutes in Canada to introduce a women’s-only program, and while it has most of the same features as the usual co-ed program, it also offers more of a focus on psychosocial support, where women can talk openly about their caregiving stresses, or how menopause is affecting their health, for example. “We see women going through our program sharing those ‘war stories,’ and motivating each other. The level of peer support is incredibly strong,” says Dr. Oh, who adds that the 16-week part in-person, but mostly virtual women’s-only program is in the works.

Women can’t say enough about how much they love having their own program, notes Dr. Oh, and Grace’s recent trial found women who completed the program had lower rates of depression and anxiety than those who completed a home-based or co-ed program, which is key because rates for those conditions are so high and hazardous for women’s health.

Meingarten, who participated in the regular program, said she loved that she had a “cheering section” of physiotherapists and classmates every week of rehab. “The staff’s sensitivity and humour motivated me to keep going,” she says. “I never thought I would say this, but they actually made exercise almost fun.”

When she first started, Meingarten couldn’t last more than five minutes on the treadmill. A year after graduating, however, she was able to complete the entire 11-minute treadmill test.

For the first time in her life, she’s power walking almost every day. “I still don’t love to exercise,” she says. “The difference is that now I put on my headphones and do it anyway.”