Researchers at KITE are using sophisticated technology to understand why people fall – and how to stop them. 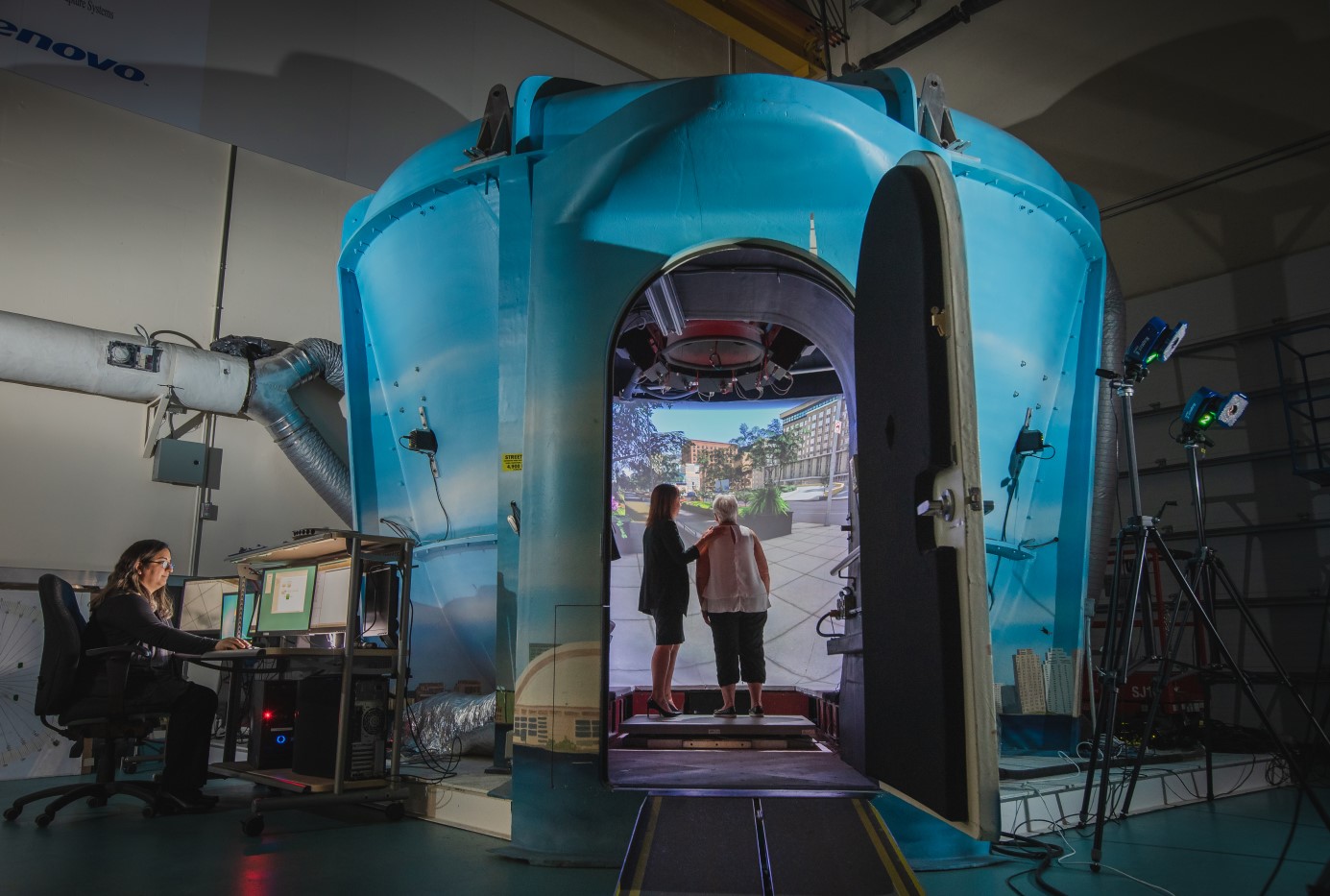 On the surface, the Toronto Rehabilitation Institute looks like the many other hospitals that line bustling University Avenue in Toronto’s downtown. However, in the basement, two floors down from its main entrance, sit four large cylindrical-like simulators that are helping solve some of the major medical mysteries around why people fall.

They look like something out of a sci-fi movie, but the research that’s happening in these structures is far from fictional. Using state-of-the-art technology, scientists at KITE, the research arm of Toronto Rehab, are trying to better understand why people fall and what tools, devices and better design can be used to prevent people – old and young – from suddenly dropping to the ground and injuring themselves.

Dr. Alison Novak, a KITE scientist and Home and Community team member at Toronto Rehab, points out that falls are the leading cause of unintentional injury and death, especially in older adults. “We want to understand the environmental impact in terms of fall prevention,” she says. “How can we modify something? What interventions are needed?”

They almost look like something out of a sci-fi movie, but the research that’s happening in these structures is far from fictional. 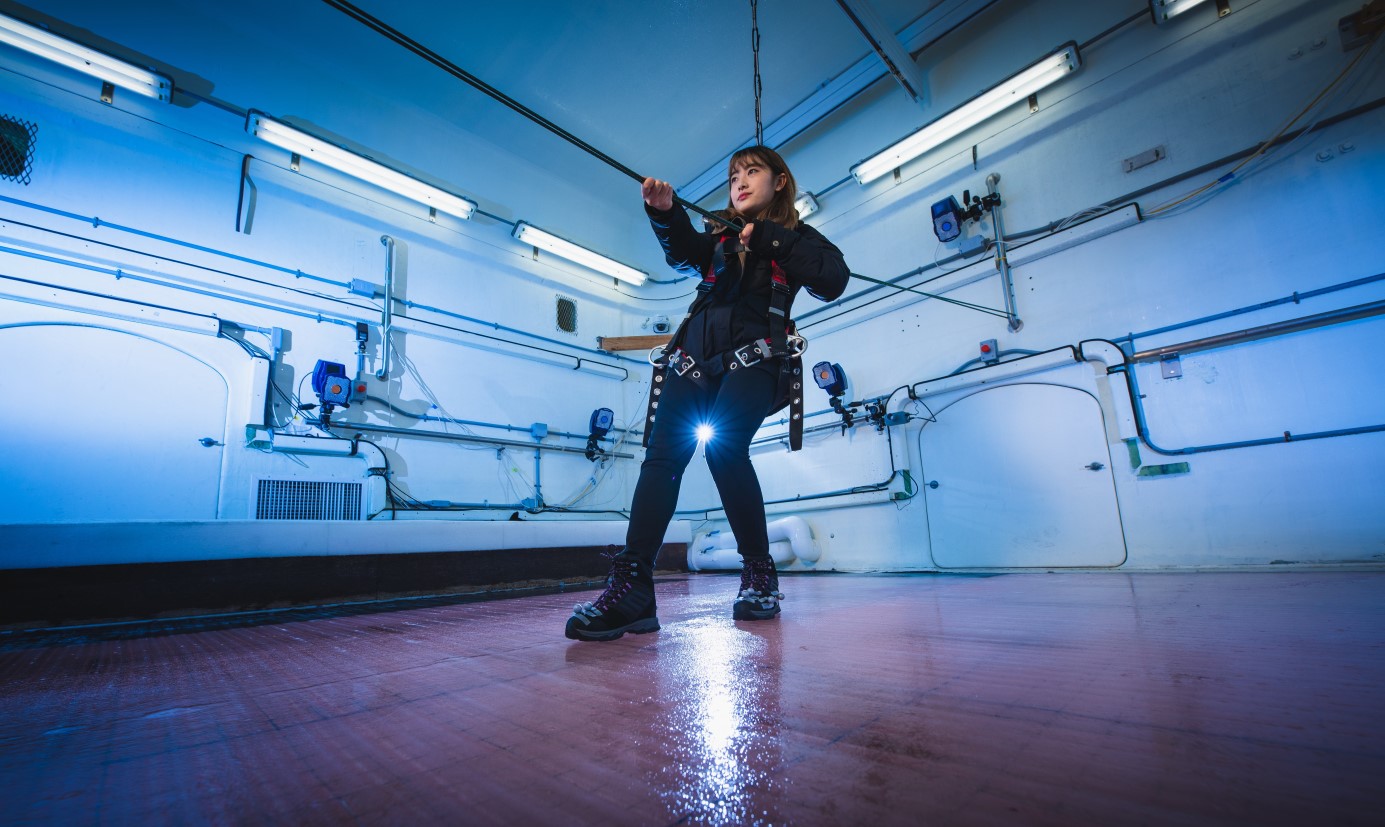 November is Falls Prevention Awareness month, but our researchers study falls in different environments, such as on ice, all year round.

The facility and its simulators – it’s been dubbed by some as “Rehab NASA,” as it looks like something that might have been designed by the space organization – is instrumental in helping Novak and other researchers better understand balance issues and investigating how different environments can decrease the risk of falling.

Each simulator is named for the situation it aims to recreate: WinterLab – a wintry, slippery setting; StreetLab – a streetscape with pedestrians and vehicles; StairLab, a staircase in a domestic setting; and DriverLab, an in-car environment.

The portable simulators are effective because they can each be placed on a motion platform – a moving base that can be controlled externally via computer – to accurately simulate motion. Using cameras placed inside the labs and coupled with sensors that track motion, scientists can gather key data regarding people’s behaviour during various biomechanical challenges. Researchers then have the ability to visualize and compile this data and make conclusions about what they’re seeing.

The portable simulators are effective because they can each be placed on a motion platform – a moving base that can be controlled externally via computer – to accurately simulate motion.

StreetLab, for instance, can create a virtual reality for the participant via a screen that surrounds the person and simulates crossing a city street, complete with obstacles as well as sounds. For example, says Campos, the simulator can place a study participant who has trouble hearing in a situation where they are walking with two friends, listening to a conversation while watching the road, all the while crossing the street and watching for turning cars. “We’re looking at what happens – your ability to multitask while you’re walking,” says Campos.

She says that people who have cognitive declines or a sensory impairment of some kind can struggle in a setting that requires multiple decisions and exposure to many different stimuli. “It may be that people have subtle deficits,” she explains. “If you present them with a situation that is challenging from a sensory or cognitive perspective, it could bring that out.”

In another simulator, StairLab, data is being harnessed that changes how structures are built. In one recent study, Novak and her team conducted a series of studies aimed at finding the optimal depth of stairs that would be most effective at preventing falls. The data was instrumental in altering the 2015 National Building Code of Canada to account for wider and deeper stairs. Novak’s team is now conducting research on the best handrail shape through reach-to-grasp studies. 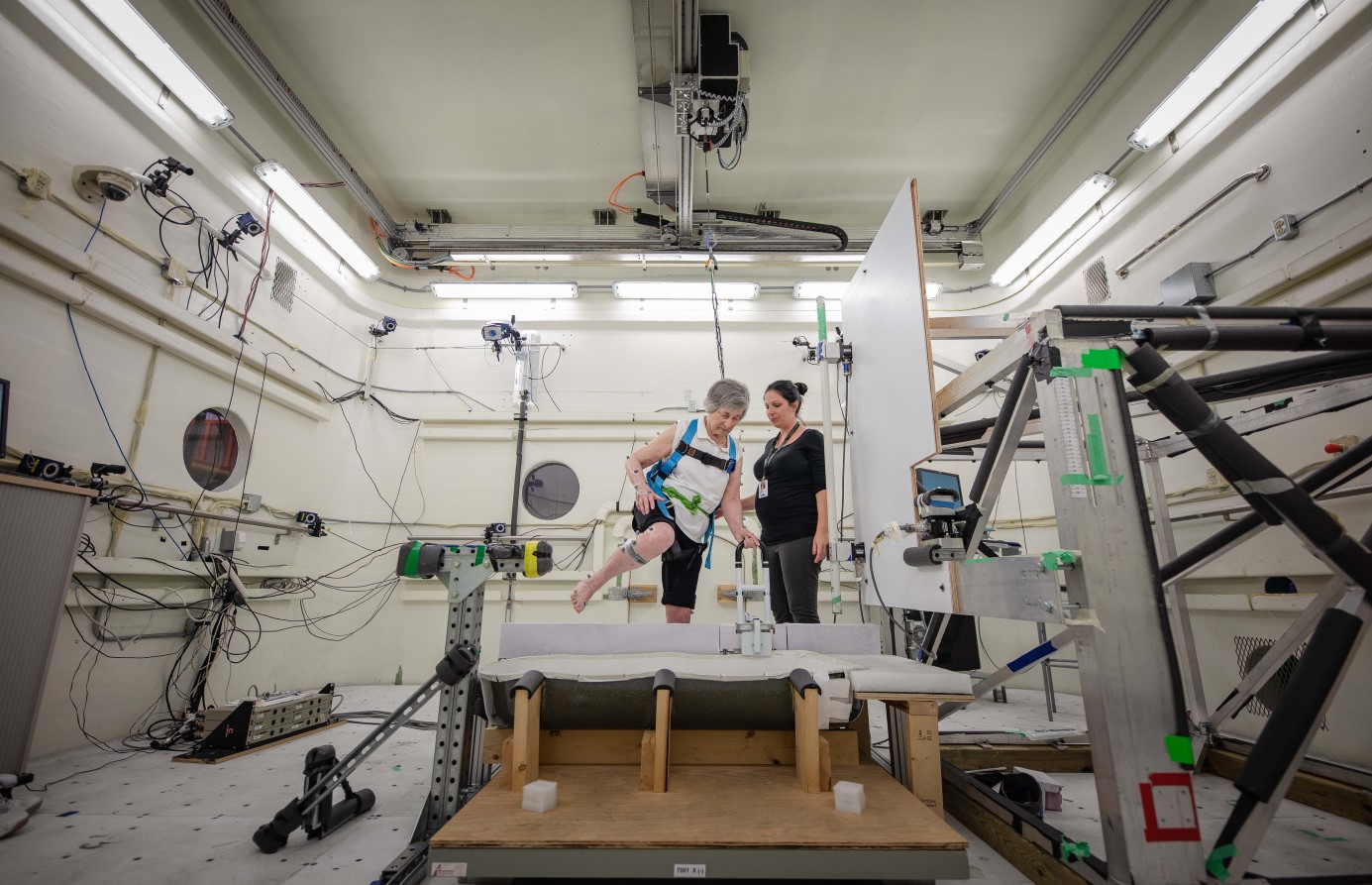 Dr. Alison Novak uses StairLab to see how people walk up and down stairs as well as enter and exit bathtubs. Her research has led to important building code changes.

Another study looked at the optimal length of stairs. Participants were asked to mount stairs, and were then exposed to motion. As they began to lose their balance, researchers tracked how they landed and where they placed their feet (participants were harnessed to prevent injury). The findings revealed that 10-inch stair lengths were the safest and could “reduce falls three-fold,” says Novak. This research was instrumental in getting the old code, which mandated 8 1/4-inch stair lengths, changed to 10 inches.

Campos says that researchers are also using the simulators to explore how hearing loss and falls are related. She notes that people with even mild hearing loss have a three-fold higher risk of falls, and explains that scientists want to know why this occurs – and how it can be prevented. One current theory is that for people with hearing issues, “cognitive resources that you need for your walking safety are reduced due to the increased resources needed for listening,” which puts them at higher risk of falling, she explains.

37 million: Number of falls globally every year that are severe enough to require medical attention.

As for Novak, she is now focused on research around grab bars in bathrooms, hoping to again shape the Building Code of Canada once the Canadian Institutes of Health Research–funded study is published. She finds the research very rewarding. That’s because every time an adjustment to the Code is made, she knows that lives are being saved.

“When we change the codes and the standards, we think we can affect the fall rates on a population level,” she says. “But we need convincing evidence. With the labs, we are able to find that evidence.”

For more information about the Challenging Environment Assessment Laboratory or to work with us, please contact Yue.Li@uhn.ca