Rehab at the ready

When COVID-19 hit, KITE launched a comprehensive tele-rehab program within weeks. It’s now helping other institutions connect with their own patients virtually. 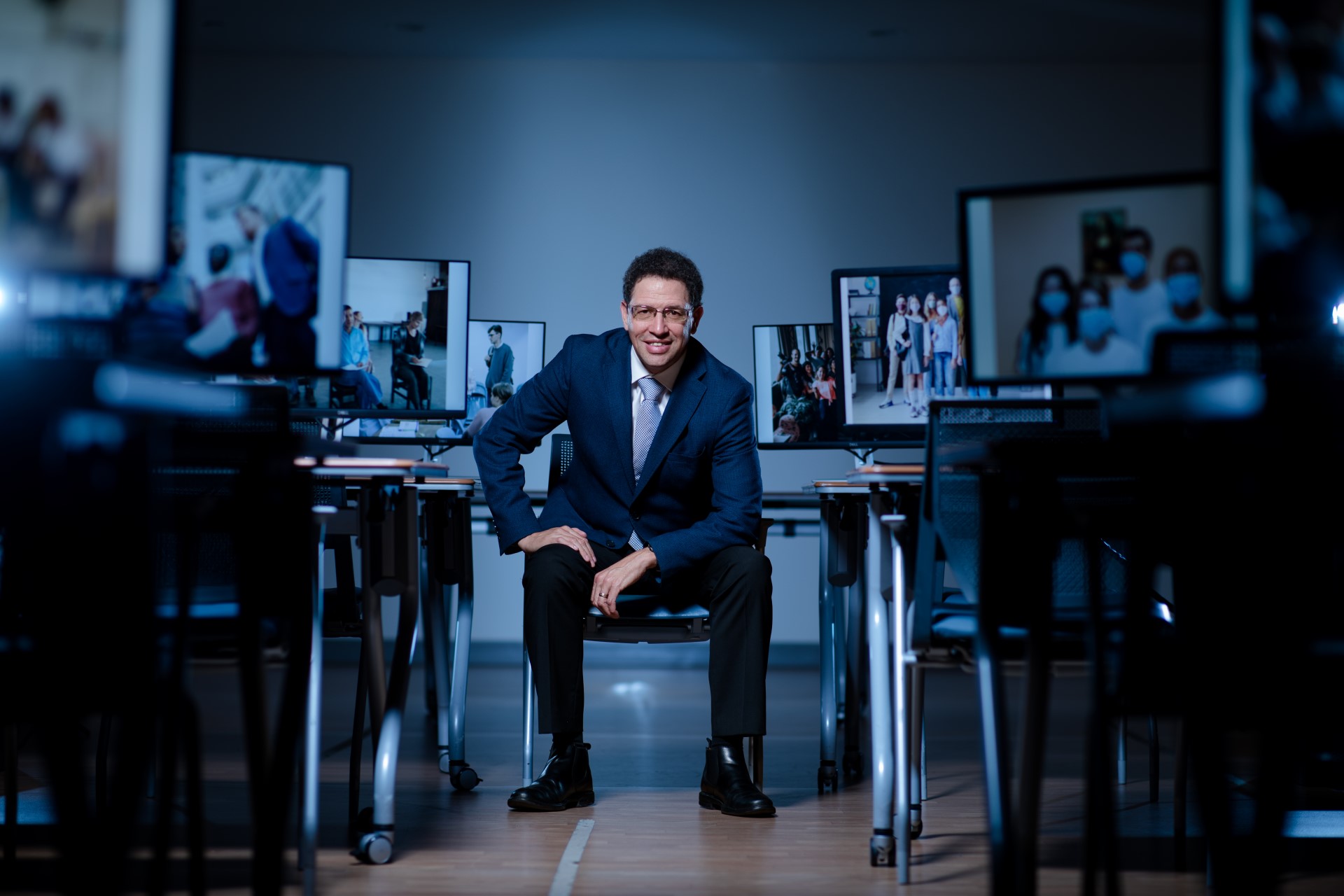 “Could you order 25 webcams today?” Dr. Mark Bayley remembers asking one of his staff almost immediately after the pandemic began. Dr. Bayley, who is the Medical Director of Toronto Rehab and UHN’s Physiatrist-in-Chief, had immediately grasped the potentially dire implications that the COVID-19 crisis could have on patients like his – people who had recently experienced a stroke or brain injury and required in-person rehab as part of their recovery.

After these potentially devastating events, there’s a narrow window during which the brain is primed to rewire itself, particularly with the recovery of motor functions. But rehab is a must. “Failure to do rehabilitation activities during that period may ultimately lead to a worse recovery,” explains Dr. Bayley, who is also a senior scientist at KITE.

Back then video platforms were rarely used for rehab, but he knew to urgently order cameras. How? Because since 2005 he has been offering rehab online to patients in distant communities via Ontario Telehealth. “It was pretty clear right away that the only thing that was going to work was virtual rehab,” says Dr. Bayley, who is widely recognized as a tele-rehab pioneer.

The team jumped out of the gate instantly, arranging to deliver video-based rehab before many other institutions recognized the sound of the starter’s pistol. He was in a unique position: he had been advocating for the creation of a virtual rehab program for two years prior to the pandemic, so “we were primed to do it, even though we were at the stage of minimal adoption,” he explains. Suddenly, COVID-19 had changed the game.

Still, despite his experience in this area, Dr. Bayley and his colleagues had to learn a lot on the fly, as the demands of a virtual rehab session are very different from those of most virtual doctor visits. For instance, “you’re assessing people doing physical things – you’re having them walk, talk and prepare a meal,” he explains. Consequently, for example, “you need to make sure the participant has the technology and can use it, and that they have a caregiver present who can supervise therapy,” he explains.

And, since many of the patients involved have physical weakness, poor balance or other limitations, compared to other types of tele-health visits, a virtual rehab session, “is inherently a little more dangerous, and requires a bit more creativity,” Dr. Bayley notes.

Tele-rehab can also present possible privacy issues. For instance, say someone Zoom-bombed a session with a CEO who was quietly undergoing rehab after a mild stroke, then revealed that fact to others. A potential leak, “of such sensitive information, regardless of stigma, was a real concern,” he says. Using Microsoft Teams, which is more secure than other platforms, helped alleviate those fears.

It was pretty clear right away that the only thing that was going to work was virtual rehab. – Dr. Mark Bayley

Dr. Bayley and the team regularly solicited feedback from therapists and patients to help them get a better sense of what everyone needed to make rehab successful. “We have a very capable project manager who set up surveys online,” Bayley says, “so we got real-time information about what the barriers were.” In response, Dr. Bayley and the team did everything from tweak the technology to develop step-by-step guidance on how to do different exercises.

At the time, Dr. Bayley assumed other hospitals were also rolling out tele-rehab programs, only to discover otherwise. “During informal conversations with my colleagues, I would say, ‘What are you guys doing in tele-rehab?’ and they’d say, ‘Our hospital hasn’t figured out the privacy issues yet,’ or ‘We are not offering outpatients anything because our hospital has moved all of our staff to in-patients.’ That’s when I started to realize we needed to help other centres learn from our experience of rolling it out.”

A few weeks later, Dr. Bayley and the team began helping health professionals at other institutions navigate the uncharted waters of virtual rehab. As those participants were looped into the feedback process, other issues emerged. For instance, therapists and clinicians with no prior experience needed guidance around what to do if they couldn’t get a connection, while many feared a lawsuit or loss of their professional licence if, say, a patient fell during walking practice. Many organizations didn’t have policies for dealing with remote care, or knowledge about whether patient privacy could be adequately protected, too.

With KITE’s experts having expertise in a variety of areas, ranging from project management and quality improvement to research and knowledge translation, Dr. Bayley and the team were able to create an online resource for other centres – which included everything they needed to set up and deliver tele-rehab – within three months. In change management terms, that’s something of a miracle. “We accomplished what otherwise would have taken a year to do,” he says.

In its first iteration, the free tool kit – which has since been downloaded more than 500 times – laid out basic instructions on such topics as how to obtain a patient’s consent to attend a virtual visit, and troubleshooting technical issues. Version 2.0, which is in the works, will also include how to curate lists of videos demonstrating various exercises.

Prior to the pandemic, Stacey Marshall, an occupational therapist with the Multiple Sclerosis Outpatient Services Program within Toronto Rehab’s Brain and Spinal Cord Rehabilitation Program at the Rumsey Centre, knew little about virtual care. “Our services were fully in person,” she says. With the help of the tool kit, clinicians in her program quickly transitioned to seeing clients online using the Ontario Telehealth Network and Microsoft Teams, both of which meet UHN’s confidentiality criteria, and enable therapists to share materials such as brochures.

In the process, Marshall and her colleagues soon discovered these platforms actually had some advantages over face-to-face visits at the hospital. “When clients came for outpatient sessions, they would try to describe what their kitchen setup was like, or take pictures on their phone to show us,” Marshall says. Now therapists can see the client carrying out an activity in their own environment. In the case of a client who was having difficulty getting in and out of bed, for instance, an occupational therapist could watch the process and identify exactly which pieces of safety equipment would make those transfers go more smoothly.

500+: The number of times the Telerehab Toolkit has been downloaded.

Not only do virtual appointments give clients more independence – they no longer have to rely on others for a ride – they also allow for adjusted scheduling that’s far more favourable for patients with problems such as fatigue. “If someone was coming in person, sometimes they would have two or three one-hour sessions back-to-back,” Marshall explains. “Without having to worry about transportation, we’ve been able to schedule visits so they can focus on one thing for 45 minutes, and maybe have their next session the following day.”

Lisa MacIsaac, who has multiple sclerosis, and attended virtual therapy at the Rumsey Centre, speaks highly of both the clinicians she saw there, and the experience overall. Cognitive and memory strategy sessions for dealing with brain fog were very helpful, she says, as were group yoga and meditation. “Any technical issue was dealt with immediately,” she adds. “It made you want to try different things like this. I can’t imagine why someone wouldn’t want to do it.”

As successful as the transition to virtual rehab has been over the last 18 months, Dr. Bayley is only getting started. He wants to establish a centre dedicated to researching and refining virtual rehabilitation care, and reach a far greater number of patients.

To start with, he plans to use his research to determine the effectiveness of tele-rehab. So far, only online delivery of psychological interventions, such as counselling and cognitive behavioural therapy, have been adequately studied. The team is about to conduct a large randomized controlled trial looking at virtual rehabilitation for lower limb recovery after stroke.

Another area of study, “looks at how we can use artificial intelligence to analyze cell phone videos, or use feedback from wearables to allow us to know whether a person is following an exercise properly, and give them instantaneous feedback,” Dr. Bayley says. (For instance, data on heart and breathing rates from wearable sensors would allow the system to tell a patient whether they are expending sufficient effort.) This type of technology could potentially make delivery of rehabilitation more efficient, by “supervising” patients during asynchronous sessions, or alerting the leader of a group class that attendee number five’s technique needs correction.

However, the largest group Dr. Bayley and his colleagues would like to target with their research is patients who after completing the brief bout of services that are currently funded, are left adrift. “We know there are lots of people who would benefit from rehab not just for three months, but for the rest of their lives,” he explains. “We’re hoping that people could be supported on a long-term basis to reduce the effects of aging with a disability. Our vision is to put in place the means to treat people where they live, in the environment they live in, and do it efficiently, such that we can support them on a lifelong basis.”

With the pandemic continuing to have an impact on the health system, virtual rehab is likely here to stay. For organizations that haven’t yet implemented virtual rehabilitation, Toronto Rehab and KITE created a toolkit to help. Called the Telerehab Toolkit, it contains information, resources and checklists for rehab providers to use when creating their own virtual rehabilitation program.